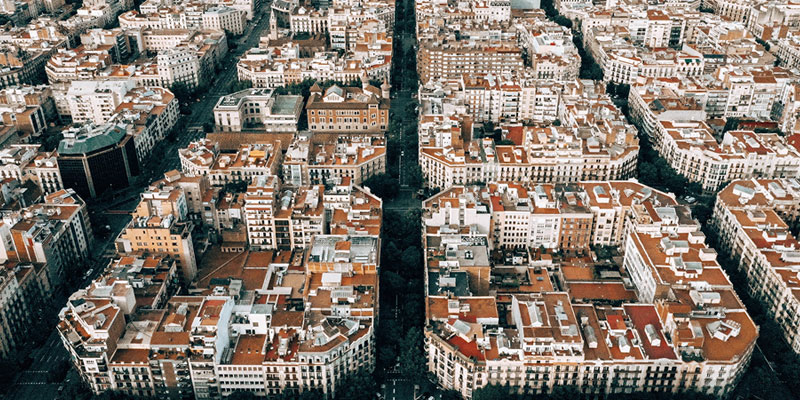 Eixample (pronounced: e-shamp-le) is one of the most iconic neighborhoods in Barcelona and in the world. The word eixample is Catalan for extention or expansion and it was originally designed by the Catalan engineer Ildefons Cerdà in the 1850s as an extension to the old city.

Cerdà was a huge fan of straight lines and a well-structured urban layout. His vision was to build an area that met the people’s need for leisure, space, health and social relationship. The main goal was using the space in the best possible way and that is why he used a grid-like pattern to make sure no space is wasted.

Eixample tends to be noisier during the day and quieter at night compared to the other neighborhoods like Poble Sec and Raval. The whole district is very multinational and multicultural especially in the recent years.

The entire Eixample district is made up of six main neighborhoods. 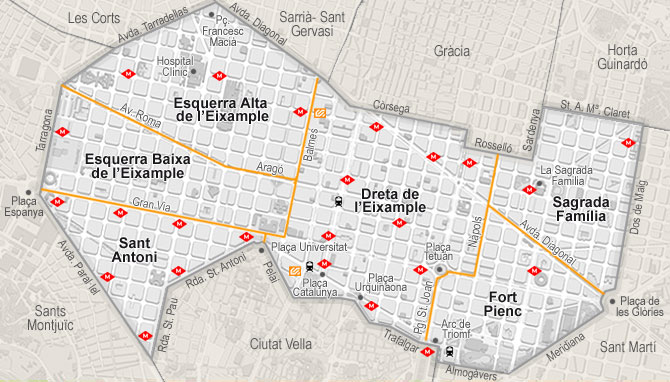 Points of Interest in Eixample

Eixample is full of PoIs where you can spend days discovering all the beautiful buildings, restaurants and parks. Eixample has three of Antoni Gaudí’s most iconic works where millions of people go to see them every year.

Casa Batlló is one of Antoni Gaudí’s masterpieces and it’s definitely a must-see. More than one million visitors visit Casa Batlló each year.

The original building was built in 1877 by Emilio Sala Cortés and it was purchased by Mr Josep Batlló in 1903s, a textile industrialist who owned several factories in Barcelona and a prominent businessman. Between 1904 and 1906, Antoni Gaudí was commissioned to fully reform the building both from the outside and inside.

Since 2002, the facade of the building always according to the season or the occasion. In the winter, it is covered with snowballs (fake, obviously) and with red roses on Sant Jordi, the Catalan Valentine’s Day. 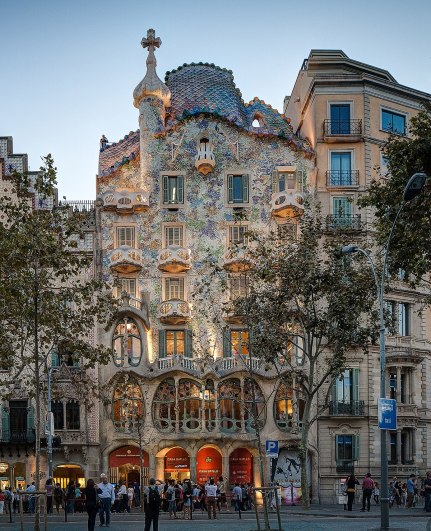 La Pedrera is another great work designed by the famous Catalan architect Antoni Gaudí. It was built between 1906 and 1912 and it was the last private residence designed by this architect. The building is located on the avenue Passeig de Gràcia and just a few of blocks away from Casa Batlló.

Remember: If you are a Studentfy member, you will receive up to 28% discount on your adult ticket price. The ticket will have to be bought at the ticket office and you will have to show them your Studentfy card. 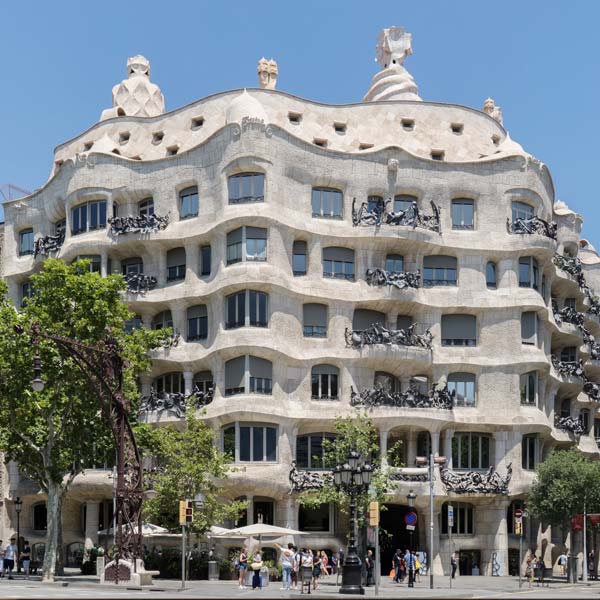 Passeig de Gràcia is one of the most important avenues of Barcelona where La Padrera, Casa Batlló, Barcelona’s Stock Exchange Market, Hotel Majestic, and many other important sites are located.

You can find buildings with both modern and Gothic facades. Passeig de Gràcia’s beauty can be appreciated only by walking through it and enjoying its uniqueness. 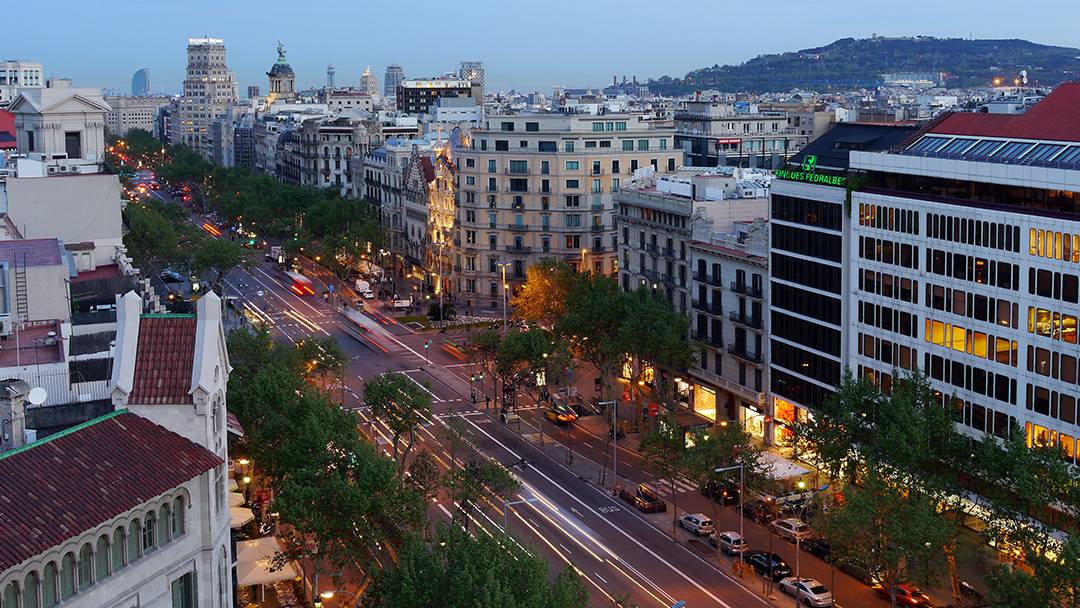 Sagrada Familia is one of the most iconic spots in Barcelona and it’s a must-see. If there is only one place you have to see in Barcelona, it would be this amazing masterpiece. It was designed by Antoni Gaudi and it has been under construction for more than 135 years (some parts were destroyed during the Spanish civil war).

It is located in the neighborhood Sagrada Familia and currently, 70% of the Basilica is finished and the constructors are working on building the six central towers. 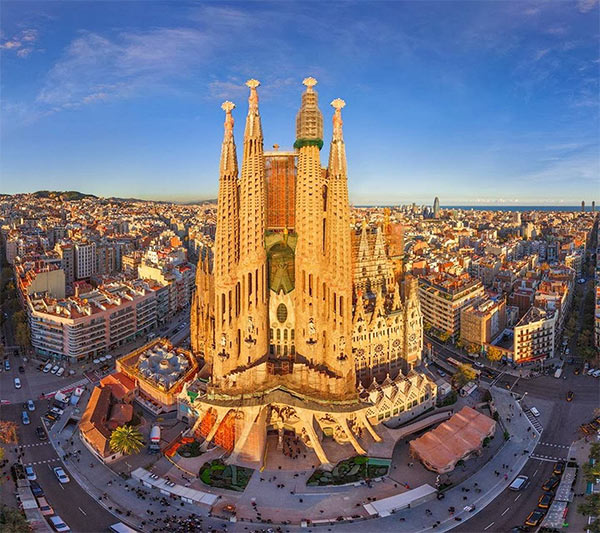 Gaudí disliked straight lines and angles because they don’t often appear in nature. Instead, he based his design on the swirling curves of nature and this is clearly visible in his works.

When La Sagrada Familia is completed, it will be tallest religious building in all of Europe. The central tower in the middle will reach 170 meters tall. Gaudí was high inspired by nature.

The entire work has elements taken from the nature from animals to plants and trees especially the interior of the church where the columns resemble trees in a forest.

If you are planning to visit Sagrada Familia during the summer, we highly recommend you to buy your ticket at least two weeks in advance so that you can visit one of the towers as well. 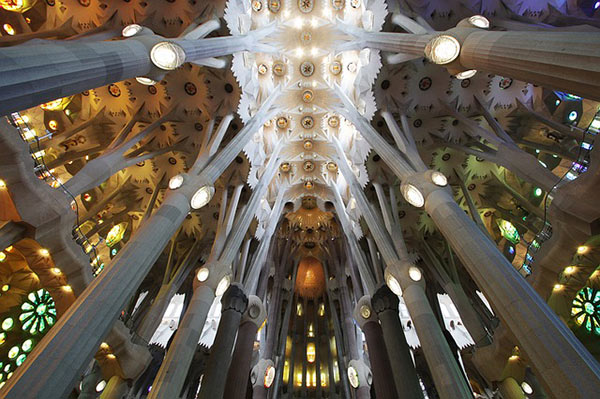 Arc de Triomf (English: Triumphal Arch) is another iconic landmark in Eixample. Barcelona hosted the World Fair in 1888 and the arch was built as the main gateway to the fair. It was designed by Josep Vilaseca in the Moorish style. It has a very classical shape with reddish bricks and stands about 30 meters tall (100 feet).

There are various sculptures on the monument representing agriculture, science, trade and international commerce. There are also 49 shields representing the 49 provinces of Spain at the time of its construction. The arch’s and sculptures’ message was for Barcelona to welcome all nations from all over the world to the 1888 World Fair.

There are usually street performers doing all kinds of activities from live reggae bands to rollerblade competitions. The best time to visit the monument is an hour before the sunset where hundreds of people go for evening strolls. Make sure you check out Parc de la Ciutadella which is just a few minutes away from the Arc. 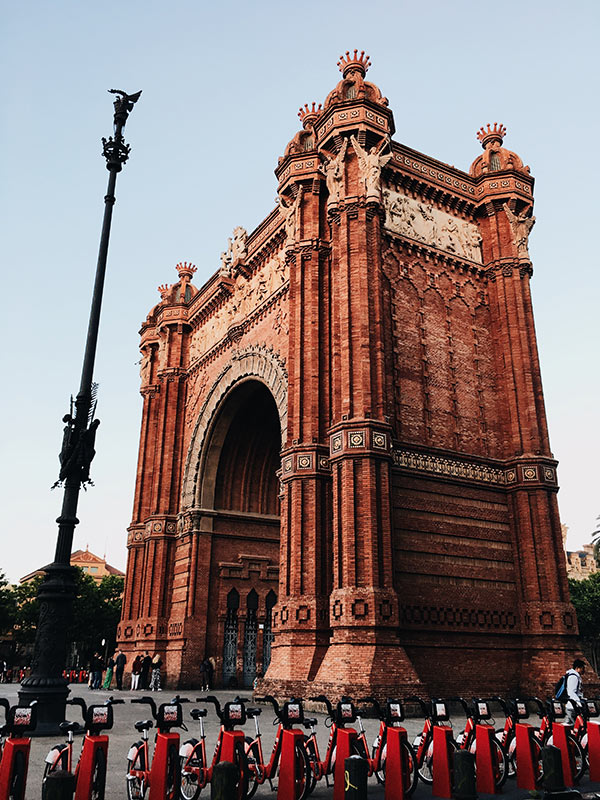 The Future of Eixample

The Municipality of Barcelona has ambitious plans to reduce its pollution and noise level. The plan is to free up 60% of the streets taken by the streets and turn them into a citizen space.

The idea is to create superilles, or superblocks, which would operate as mini neighborhoods where traffic will flow around it and more space will be dedicated to the pedestrians. This limits the access of cars and other motored vehicles to the a superblock reducing the level of noise pollution.

If you are interested in learning about superilles or superblocks, watch this great video by Vox where the entire concept is clearly explained. 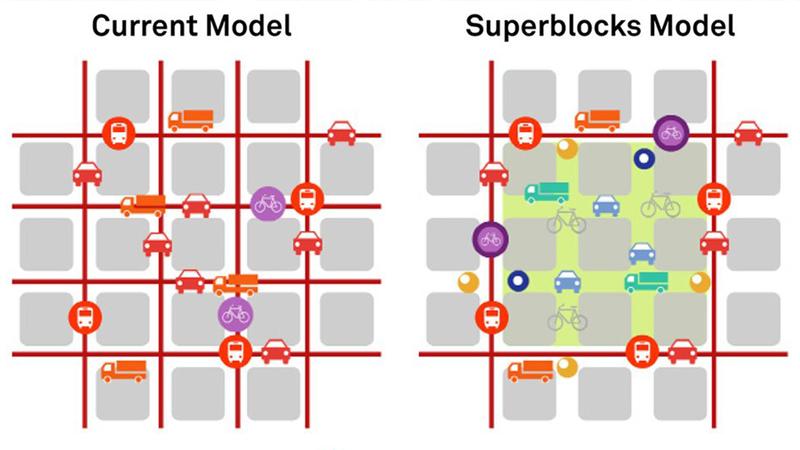 Stay tuned as we will be posting information about the other neighborhoods soon. Share your photos and videos of Eixample and its points of interests with the hashtag #Studentfy on your social media and we will feature your photos on our website.

Would you please do a post on Gracia? I would love to know more about that neighborhood.

Hi Emsa. We are currently working on many separate blogs about the different neighborhoods in Barcelona, including Gracia. They will be published very soon. Stay tuned. 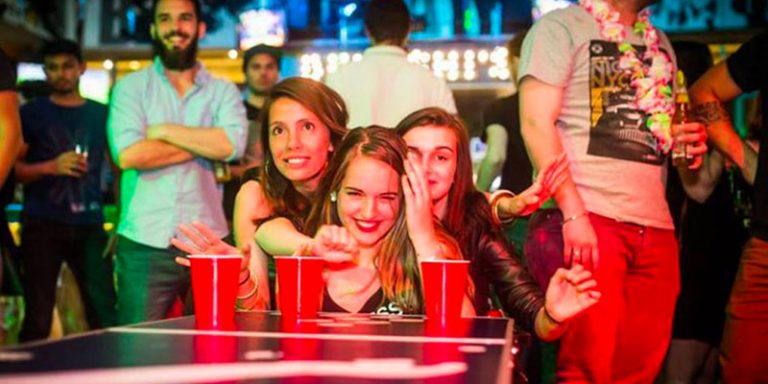 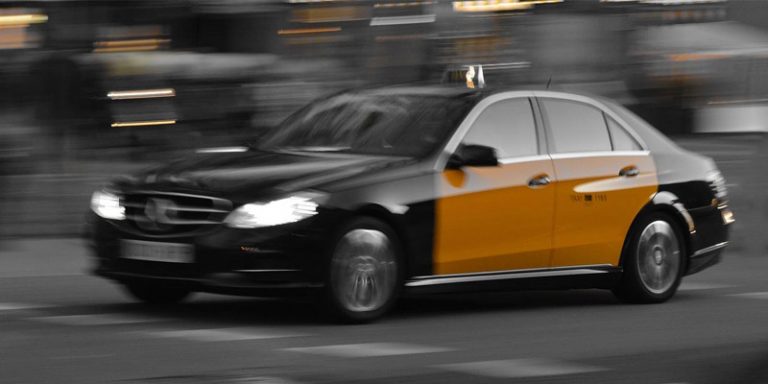 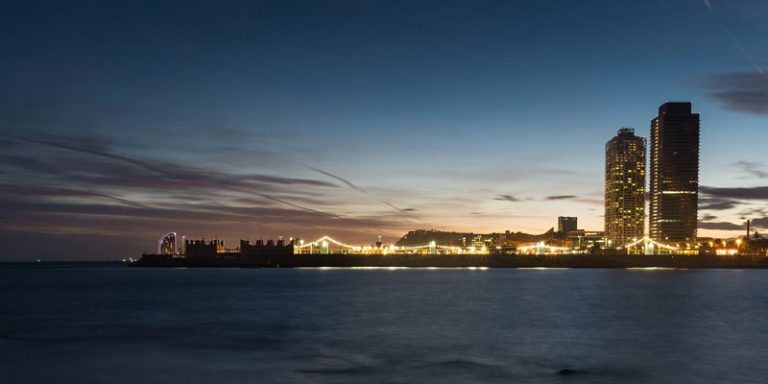 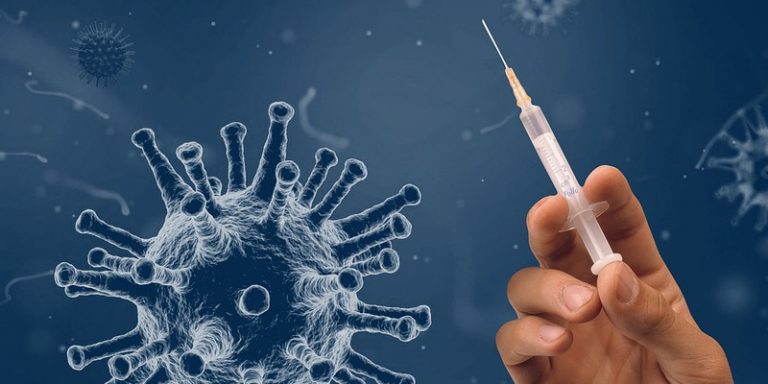 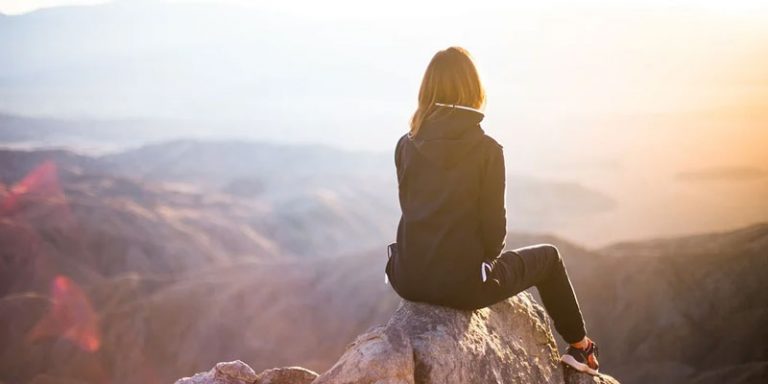 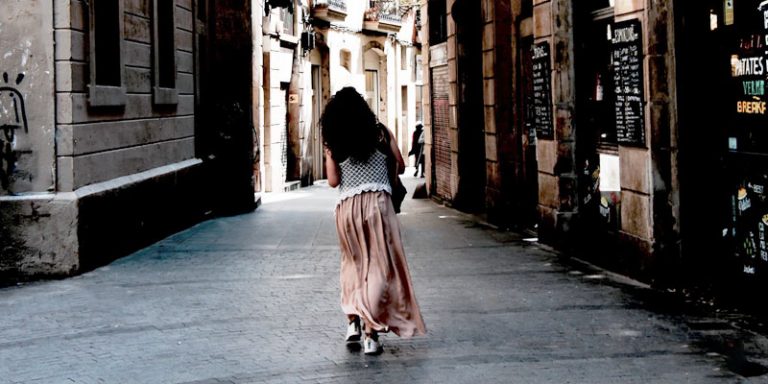