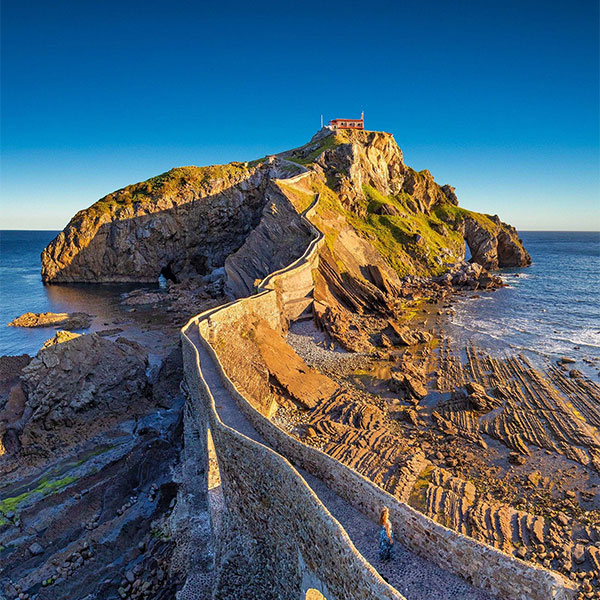 Don’t miss our trip to the north of Spain: País Vasco or the Basque Country.

Where is País Vasco/the Basque Country?

The Basque Country, or the País Vasco, is an autonomous community in northern Spain. Locally known as Euskadi, it has its own language (Euskadi), its own culinary traditions, and a distinctive geographic and cultural landscape. In this trip, we will visit the most important cities in the north of Spain:

San Sebastian: boasts one of the best city beaches in Europe. Sebastian is also redefining the Basque image around the world with its extraordinary cuisine. The city has two restaurants ranked in the list of the World’s 50 Best Restaurants and in addition, has 16 Michelin stars spread across 9 restaurants. It is also one of the best places to eat pintxos – culinary creations in miniature form, similar to Spanish tapas but better.

San Juan de Gaztelugatxe: one of the most impressive places in the Basque Country. San Juan de Gaztelugatxe, whose name means “castle rock” in Basque (“gaztelu” = castle + “aitz” = rock), is a definite “must” if you are visiting the Basque Country. This is where many scenes from Game of Thrones have been shot, most famously the Dragonstone. Whether or not you like Game of Thrones, you cannot miss this spectacular corner when you have the chance.

Included in the price

Friday 20 March
– 22:45 We meet in Plaza Espanya between the two towers (Av Reina Maria Cristina)
– 23:00 The bus leaves. Please be on time.
> It will take about 7 hours to get to Gaztelugaxte, we will stop for about 1 hour to have breakfast.

The exact time may slightly differ depending on the weather, traffic or any other factors. In case of any major change, you will be informed by email. Always double check with your guide. The information given by the tour guide will always override what’s mentioned on the website and the email.

– It’s almost impossible to stop the bus if someone needs to use the bathroom. Please use the bathroom before the bus moves.
– The north of Spain is usually colder than the rest of Spain. Make sure you bring a warm and breathable jacket
– Bring snacks, energy bars/gels and sandwiches

This trip is organized and run by Sham Trips (GC3213) and brought to you by Studentfy.